I am Jay Chou but am I Strong or am I Weak? 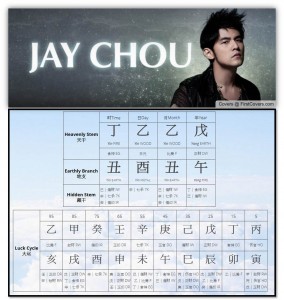 Given this Bazi, how would you first interpret the strength of the Daymaster?

One might come up with a few possible answers:

2. Yi wood born in earth season with the presence of only 1 yin wood next to it. Weak chart.

3. 6 out of other 7 elements in the Bazi chart are weakening the Daymaster but born in winter season where water qi is prevalent. So, the chart is weak but not-so-weak? (Confusing.)

4. The chart belongs to a follow-the-wealth Bazi.

If you follow the usual SOP (Standard Operating Procedure) of assessing a Bazi chart, this will bring us to the next question, “So, what are this person’s favourable and unfavourable 5 elements?”

This is an extremely important step because without knowing them, how do we inform this person when will be his good luck cycle? When I say good luck cycle, I mean when will he make good money, become famous or rise through the ranks and files?

And without knowing the unfavourable elements how do we pinpoint to the years and months that he will lose money, get cheated, break up with his girlfriend or even get into a mishap?

For your information, the owner of this Bazi is Jay Chou – one of the greatest icons in the Taiwanese mando-pop scene. I would describe him as a rare gem which was lucky enough to be uncovered and unearthed by famous host, Jacky Wu, at his early 20s. While he does not have the striking and dashing good look like most of his Taiwanese counterparts, he has been labeled as one of the most creative and talented songwriters and singers in the global music arena. Wu has ever said that this guy carries with him in the stomach a team of musicians. He is simply magical.

From an inconspicuous-looking boy-next-door that was often seen in a pair of rugged jeans with basketball snickers, Jay has enjoyed a meteorite rise in his singing and even acting career since the turn of the millennium till today. Obviously, he has made many buckets of gold and is now in the A-list of celebrities. Newspaper ever reported that Jay had lost about a million dollar in Singapore’s casino within a few games without batting an eyelid.

Jay was also skillful with girls and I read from tabloids that he is skillful with words too – despite the fact that he is often come across as a shy and introvert person. Hey, but wait till you see his Bazi.

(Hint: In Chinese classic, there is a saying 八字出现偏财，少爱正妻多爱妾. In English, it means that if a man’s Bazi has both direct and indirect wealth stars, he will prefer his concubines to his wife. Well, it also implies a great Casanova.)

He was linked to many beautiful famous celebrities ever since he became famous but he finally set his eyes on his wife whom he married in 2014. You can read up more about Jay Chou’s life in Wikipedia.

To date, he has maintained his strong position in the regional entertainment scene. So, based on his life path that has unfolded so far, would you be able to now at least make a guess on his favourable and unfavourable 5 elements?

If you have read him as a weak chart, then the wealth stars in his Bazi would be regarded as negative element. Then how do you reconcile with the fact that he multiplied his wealth during the luck cycle of Wu-Chen?

Also, his Daymaster is sitting on 7 Killing star which is inside the spouse palace too. Is this star good or bad for him in terms of marriage and career? This is again crucial because the quality of his next two luck cycles of Geng Wu and Xin Wei is going to hinge on the fact that whether his Direct Officer and 7 Killing stars are helpful or harmful to him. Are they Dr Jekyll or Mr Hyde?

Well, this is exactly what I am going to share with the Semi-pro Bazi course students. In the study of Bazi, a person’s rise and fall and his capacity in life, whether he or she can succeed or land himself or herself in the top echelon of the society, greatly depends on the quality of the Direct Officer or 7 Killing stars. Besides, wealth star also plays quite an influential role in qualifying a person’s Bazi. In Chinese, we say that “Wealth is a source of nurturing our life.”

Presence of strong wealth stars in a person’s Bazi does not mean much. Without any form of protection, he or she is vulnerable to attack from negative Luck Cycle. Therefore, it is easy to see someone with wealth structure to collapse and go bankrupt overnight. Their life can be a yo-yo. In Jay Chou’s case, he is born into a wealth structure being protected by Eating God. This is superb structure. This is akin to a Good-Class-Bungalow. Without the fire elements, this Bazi is just average.

I have specially picked this case as one of our main case studies for this weekend’s Bazi Semi-pro class. I am going to answer all those questions that we have raised here but first and foremost, let us determine his strength of Daymaster. Out of the millions of permutations of Bazi charts in the world today, you will soon know that every Bazi is only to be classified under one of the followings:

So, what is Jay Chou?

Click on the underlined words for upcoming Bazi Semi-Pro course and a Special Bazi 1-Day Workshop in Malaysia on “Authority Stars & Your Career Luck”.