“2016 is a Blind Year. It is inauspicious to get married and if you do so, you will become a widow.”

What a sweeping statement.

And the most astonishing thing is that those words would come from veteran practitioners who claim to be wedding date selection expert for more than decades.

In Chinese, it was purported that certain years have no Li Chun. So, in the past, people termed them as “Widow Year” 寡妇年, “Blind Year”盲年 and “Year of No Li Chun”无立春之年. Rumours have it that if you get married in such year, you will end up having bad marriage.

First and foremost, if you have some basic understandings of our solar system and Chinese calendar systems, it is impossible not to have a spring isn’t it? For students of Chinese metaphysics, you know that most of our Feng Shui, Qi Men Dun Jia and Destiny Analysis systems depend on solar calendar and the quintessential 24 Jie Qi. Since the ancient time, people had relied heavily on 24 Jie Qi for farming purpose as it spells out the month and date of climatic change. Lunar calendar, on the other hand, does not give you any clue on dates of Li Chun, Solstices and Equinoxes. Nevertheless, for the lunar calendar, which is developed based on the revolution of moon around the earth, does serve other important astrological functions. For the Chinese, generally, we use lunar calendar to check on some important festive events.

The objective of this article is for me to clarify some of the misconceptions and myths about Blind Year which have inevitably resulted in apprehension among some couples who have plans to marry in 2016. I have always explained this at length during date selection classes with illustrations and I thought that before 2016 kicks in, I should address this issue in a more layman approach. In fact, I am going to share with you some of my notes which are hitherto, privy to my students. I would try my very best to explain it in written form instead of verbal.

Let us zoom into the illustration on Blind Year below. 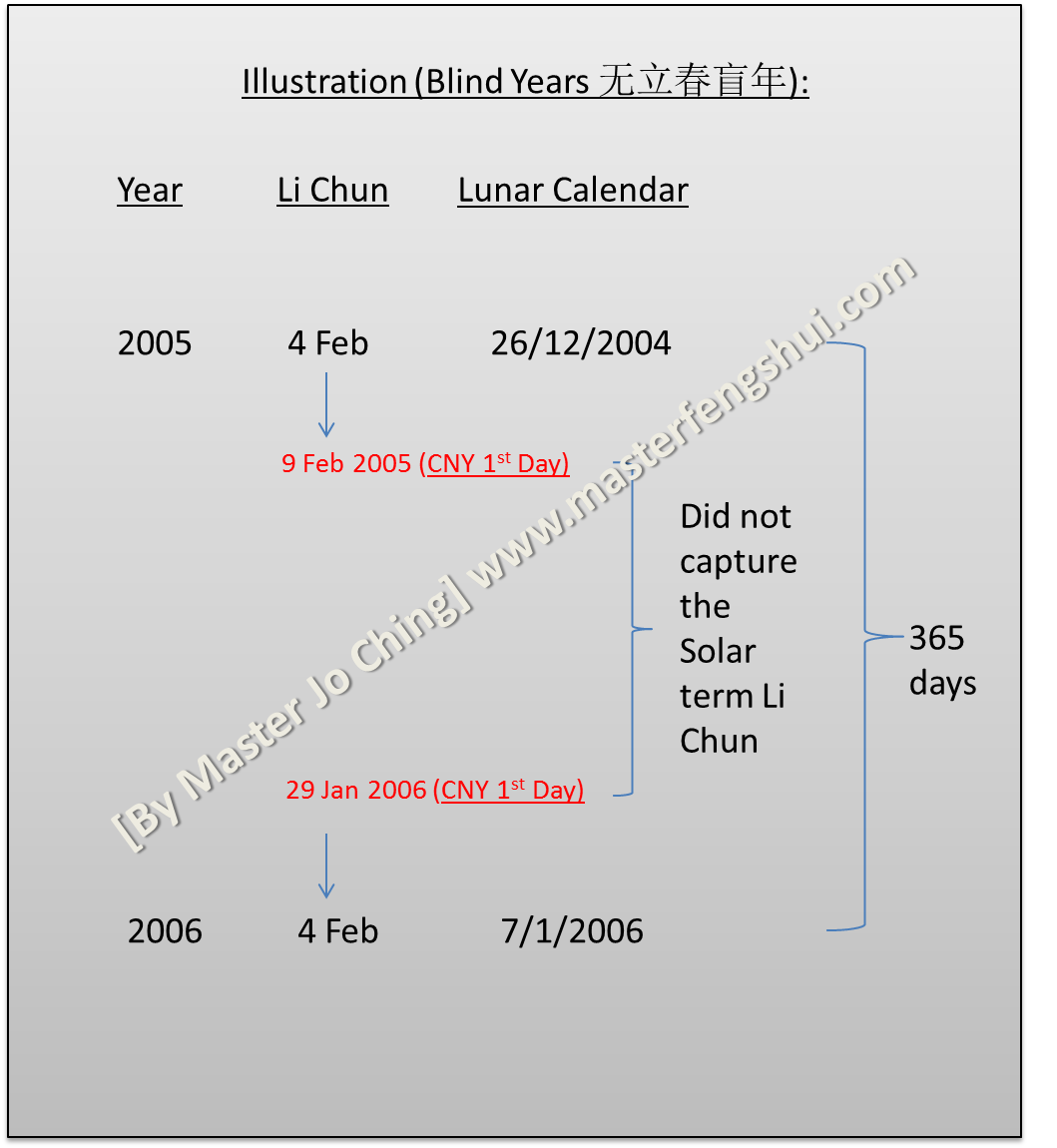 2005 was regarded as a Blind Year or No-Li-Chun Year (but it has no scientific basis) because:

Next, let us look at the illustration on another special scenario – Double Li Chun Year (双春年) below. 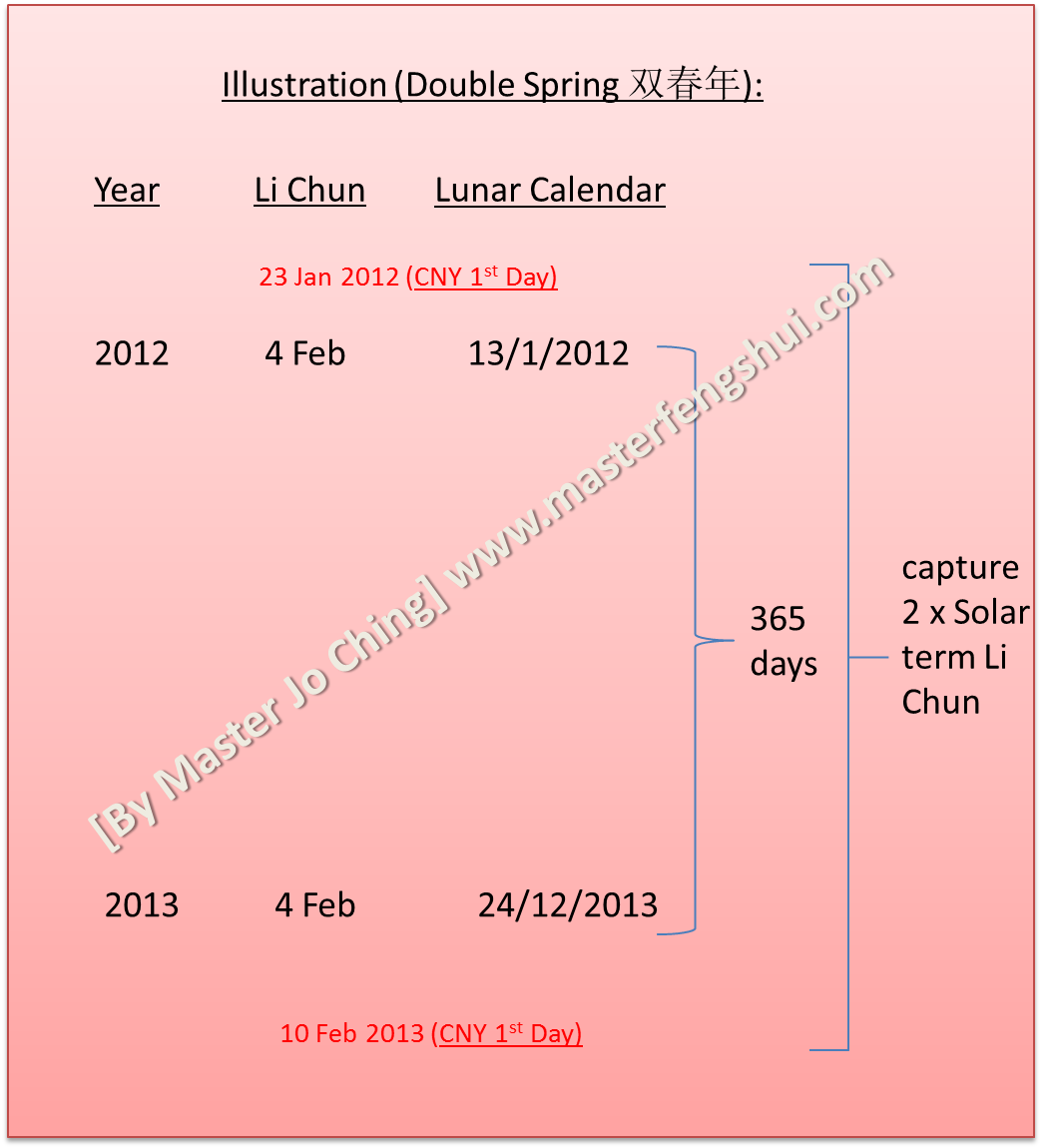 Going by the same logic:

The other years are normally one Li Chun with one CNY.

In the Chinese language, the meaning of Chun (春) can sometimes be intimately associated with love, apart from the season of spring. When someone finds new love or remarries, we would tease him or her that he or she has found “2nd Spring” 第二春. Hence, in the past, when the common folks were told that the year had no Li Chun, it probably led them to imagine and hypothesize that this must be bad for love too. From there, words and thoughts got more twisted and today, it ends up that people adopt this blind faith.

With this, I wish everyone a very prosperous new year and I would like to reassure every couple who is getting married and their parents, 2016 will be safe to tie the nuptial knot. But remember to consult your Feng Shui master on an auspicious date and time to sign on the ROM and conduct the tea ceremony.