The Old Man and the Dark Qi

This is a case extracted from the I Ching classic to demonstrate how prediction was done using the Plum Blossom divination method.

On a Ji Chou day, Mao hour, the Master was strolling on the street when he suddenly saw an old man coming from the Southeast direction. The master saw that the old man had a tinge of dark qi on his face and he asked him if something happened to him. The old man replied that he was fine and there was nothing bothering him.

Not satisfied and out of curiosity, the Master immediately perform a divination based on the Plum Blossom method. He cast a hexagram using upper trigram as Qian and lower trigram as Xun since the former trigram symbolised the elderly and the latter the direction which the old man was coming from.

The hexagram was Tian Feng Gou. 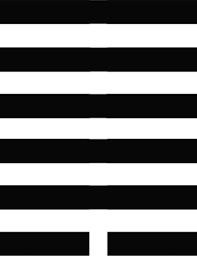 To work out the Transition and Transformed Hexagrams, the Master did the following calculations.

This means the moving yao is located at 4th line.

This also indicates that the Ti gua is Xun and Yong gua is Qian. An image of Qian countering Wood which is deemed as inauspicious.

The Transition hexagram is Qian over Qian. Again, attacking the Ti gua. The Master felt that there was no sign of positivity.

To forecast when the event would take place, he divided the sum of 10 by 2 and then told the old man that he needed to be extremely careful within the next 5 days since there would be a sign of misfortune.

5 days later, the old man went to attend a wedding dinner and accidentally choked on fish bone and died.