Whenever we look at the charts of the greats, subconsciously, we are trying to find the key to their success. We are trying to find out how is it possible that one human being can achieve so much, while others drift through their lives without getting far?

What is the engine empowering some people to go beyond of what is possible? How can we see it in QMDJ Destiny Oracle chart?

There is a star which has the Creative Power. Wherever it goes, it is visible. If it goes onto the stage, it puts on a show like you have never seen before. Here is an example.

Karl Lagerfeld was a unique figure in the world of fashion. He was recognized for his signature white hair, black sunglasses, fingerless gloves, and high, starched, detachable collars.

He was a visionary. He was the creative director of the French fashion house Chanel, who was able to revive it to its former glory. He was a creative director of the Italian fashion house Fendi Fendi, as well as of his own fashion label K. He collaborated on a variety of high fashion and art-related projects with the top artists and designers throughout Europe and the US. He was called the King of Couture, influential and of course, very controversial.

For a genius, being controversial is as a part of the game. This is who they are. In a genius’ mind, the rules are something to play with.

This is his natal chart. 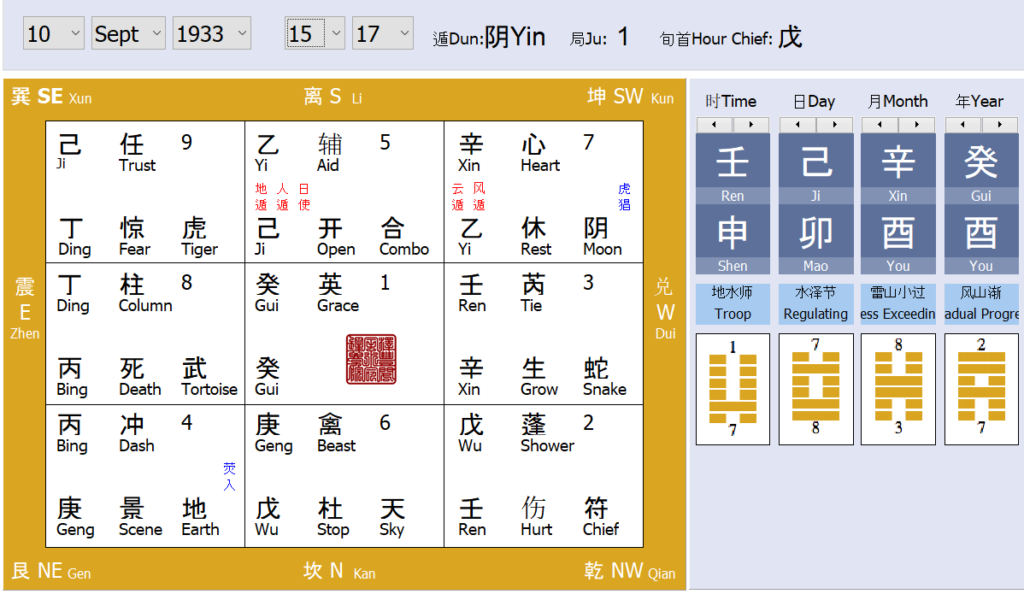 Our point of interest in this case is career palace, since Lagerfeld’s life was about the career. We will determine how this palace reflects his fame and success.

Open door relates to Qian trigram, which represents the authority. It represents anything important and all things which can shine, such as mirrors and pearls. In Li palace, these shiny objects are well lit.

The Li palace is supported by 六合 Combo. This Deity signifies harmonious relationships and marriage. Saying that he was ‘married’ to a career would not be a stretch.

Combo belongs to Yin Wood element. It is symbolical of being flexible, pleasant, and likeable. Combo is a deity of networking, supporting sales and negotiations. The wood element relates to fashion industry and in this case, it makes a positive contribution into this palace.

乙己 (Yi Ji) Stem combination is auspicious. The Sun Mystique goes into the Grave. The good wins over the evil. 乙(Yi) is active here, it takes the control over earth. Good for active people and for those who show the initiative.

天辅 Aid is another auspicious Wood component in this palace, supporting the career in fashion as well. In fact, this star represents the whole spectrum of things symbolical of what Karl Lagerfeld was about: academic achievement (his education in art history), knowledge, romantic matters, culture and mentorship.

Aid is also a symbol of rainbow. I am sure that in ancient times, rainbow would not have been associated with the gay movement, but these days it is. We can choose to ignore it, or to consider it, as it accurately communicates an important part of Lagerfeld’s personality.

Aid is auspicious for travelling and moving, and in career palace it may show that person would need to travel for work. Karl Lagerfeld was always on the move. It is documented that over his lifetime he had lived in many beautiful houses across Europe and the US.

The interaction between the palace, door, star, deity and stem combination in this chart is favorable for brilliant career indeed. However, the success would not have been what it was without one final component, the Purple White Star #5.

This star links to the Universe, to a different reality. In Luo Shu it sits in the middle and it does not relate to physical direction, as it does not belong to this realm. As it travels across the chart, it brings its blessing or a curse depending to what is in the palace. It brings challenges and tests strength of the components’ combination.

In this case, it multiplies the auspiciousness of this already fantastic career setting, creating the Couture King. It illuminates his path and now, that he has passed on, we can be certain that his legacy will not be forgotten.

PS: If you are keen to learn from a sincere and skillful master who teaches the authentic QMDJ Destiny Oracle, do consider our 3-day complete program on 22 to 24 November 2019 by Dr Anna.

To find out more about the our early bird course fee (Valid till 30 September 2019) and the registration details, do email Mr. Lester Tan at academy@destinyasia.com.sg.