Where is the Pitfall in Malcolm Turnbull’s Qi Men Dun Jia Destiny Chart?

In the last five years Australia had five Prime Ministers. No, we never get bored down under.

Today our Prime Minister Malcolm Turnbull has resigned. He has come to power in 2015 Yi Wei as a result of a leadership spill. Like his predecessor Tony Abbott, he has experienced the insurgency in his cabinet, as a result of which he has been replaced by his Treasurer.

Let us have a look at his destiny chart to see if we can spot any pitfalls in his career.

Firstly, his birth chart is Fan Yin, which reflects that things change in his life suddenly. This trend is visible in every aspect of his life, including the career and wealth. We know, that he has made his fortune in a very short span of time. 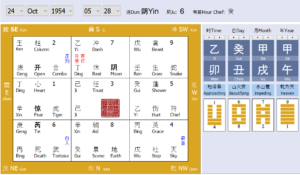 Secondly, if we look at his career palace (Open Door), we can see various pointers, both positive and negative. This reflects his prominence as a journalist, lawyer, politician and businessman. At the same time showing the pressure he was under, and the ups and downs of his career path.

壬庚 stem combination is both auspicious and inauspicious in this case.

In legal matters, this combination indicates fair decision made by court, and indeed, Malcolm Turnbull has won a number of prominent legal battles in the past. Metal producing Water is a symbol of fairness.

At the same time, this stem combination indicates difficulties in moving forward. Lots of efforts wasted.

Open Door in Xun is in Birth position (12 Life Stages concept in Qi Men Dun Jia), this indicates the prominence of his career. He is known for being a great speaker, as well as for his refined intellect. He has been supported by the Australian business and banking elites.

There is a hidden connection between the Xun and Kun palaces. The karma seeds planted in Kun get revealed in Xun.

Kun palace corresponds to Wei and Shen branches. In a current situation, which many called ‘backstabbing’, these branches played a prominent role.

Malcolm Turnbull has toppled the previous Prime Minister in a similar fashion in 2015 Yi Wei, becoming elected Prime Minister the following year 2016 Bing Shen. What goes around comes around.

Should he had known that the Purple White Star 6 in his birth chart is located in Death Door at Gen, with Tie and Tortoise, he would have never thought of initiating a power spill in 2015. The power should not be stolen. Right way is always the best way forward.

Since Xun, Kun and Gen palaces form the fire penalty, this leadership spill will have many repercussions for Australia and how its image as a politically stable country.

Thank you for reading this and we look forward to adding value to your life.